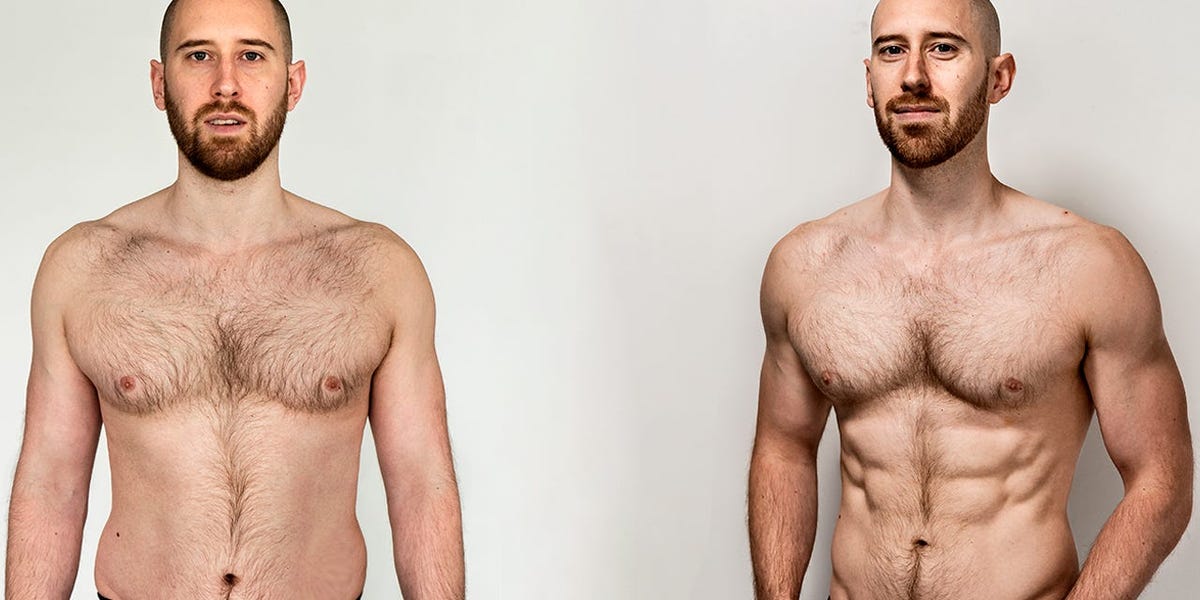 Brendan Jones said he lost 10 pounds of fat and gained 2 pounds of muscle at the same time.
He lowered his body-fat percentage by several points in his 100-day “body recomposition” challenge.
Jones said he achieved this by strength-training from home and eating in a slight calorie deficit.
Visit Insider’s homepage for more stories.

Losing fat and gaining muscle at the same time is known as body recomposition — and it’s not easy to achieve.
However, it’s not impossible, as one YouTuber recently proved.
Brendan Jones, one-half of the vlogger brothers Goal Guys, said he lost 10 pounds of fat and gained about 2 pounds of muscle over 100 days, lowering his body-fat percentage from a range of 18% to 20% to a range of 12% to 14%. He documented the whole process and posted the video on June 15.
VIDEO
Jones said that he dropped a waist size, to 30 from 32, and that by the end of the challenge he was leaner than he’d ever been.

Jones didn’t have heavy weights, so he trained high-repBody recomposition comes down to being in a slight calorie deficit, strength-training, and eating plenty of protein, as experts previously told Insider.
Jones said he worked out six days a week (foam-rolling before each workout) and broke his workouts into sessions: chest and triceps, back and biceps, and legs.
Without gym access and limited to adjustable dumbbells of up to 30 pounds each, a pull-up bar, and rings, Jones mainly did low-weight, high-rep training with short rest periods, he said.

Jones’ profile at the start and end of his challenge.

He said he also did
calisthenics
workouts and walked 30 to 40 minutes a day but avoided running to help him hold on to muscle (though experts have told Insider that you don’t necessarily need to skip cardio to build muscle).

As the challenge progressed, Jones noticed he was getting stronger — by week nine, he said, he’d achieved his long-time goal of doing three ring muscle-ups. (A muscle-up involves a pull-up but goes one step further by lifting your body up and extending your arms below you.)
“This is the first time I’ve actually lost weight and felt like I got stronger through the process,” Jones said in the video.
Jones ate in a slight calorie deficit with plenty of proteinJones said he aimed to eat 2,100 calories a day, eating 1 gram of protein for every pound of body weight (so about 160 grams). He said he’d get 20% to 25% of his calories from high-quality fats and the rest from complex carbs and vegetables.
He allowed himself some flexibility, eating out two or three times a week for the first few weeks but later cutting down to once or twice, he told Insider.

Five weeks in, Jones had seen results — his body fat had dropped to 16.9%, and he’d lost 3 pounds — but he decided to lower his calories to 2,000, he said. He kept his protein up but made small tweaks to his carbs and fats.

Jones’ back before and after the challenge.

After the challenge, Jones ate whatever he wanted for a few days, enjoying takeout and restaurants with his wife, he said.
“Now that those couple days are over, I’m working on some new fitness goals, and I am trying to stick with the foods that got me to this place,” Jones told Insider. “My goal now is to maintain where I am at and try to improve other areas of my health, so I am hoping I can get a little more flexible with my diet, and just keep paying attention to see how my body responds.”

Sarah Paulson Is Facing Backlash For Wearing A Fat Suit To Play Linda Tripp In “Impeachment: American Crime Story And Addressed The Controversy For The First Time

Britney Spears’ father to step down as conservator

Britney Spears under investigation over battery of staff