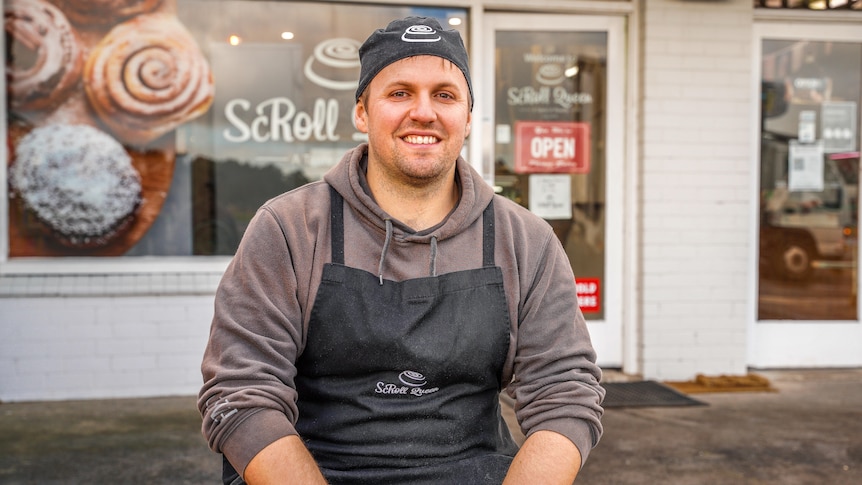 Dylan McQueen had two kids under five, no commercial kitchen experience, and $1,000 when he started his baking business.
“I had to just work from the ground up,” he says.
A seemingly big risk, the then 29-year-old had reached a crossroads in his life.
“After 15 years in the workforce … I realised I only got so much fulfilment out of the jobs that I was doing,” Dylan said.
Dylan McQueen moved out of his home kitchen and into the shop early 2020.(ABC South East SA: Bec Whetham
)The jobs weren’t bringing in much money either.
“I started thinking about the future, about sending my kids to school and the cost of living, and I just felt like any job I was in wasn’t going to support that sort of future,” Dylan says.
“That was a huge weight on my mind.”
In contrast, the thought of starting a business with no experience or financial help somehow seemed possible.
After hours of listening to motivational speakers and entrepreneurs on the internet, he followed their recurring advice — invest in something you love.
“I came to the conclusion that I love baking, I love making food, and I love making people happy at the same time,” Dylan says.
Local bakers and online research helped Dylan work out how to boost production.(ABC South East SA: Bec Whetham
)”For whatever reason, I felt really convicted to do it and that it was going to work.”
Three years later, Dylan’s got his own shop front, selling around 300 scrolls a day, managing a team of 10 employees, and planning to open a second store.
Growing up bakingThe business name can be misleading. The ‘Scroll Queen’ in this case is in fact male.
“I can thank my mum for the love of baking, really,” Dylan says.
Growing up between Adelaide and Naracoorte on South Australia’s Limestone Coast, Dylan’s early days are marked by chocolate cake mixture and gingerbread decorating.
“I ended up being brought up by Mum. She was a single mum for most of my life,” Dylan says.
Dylan McQueen spent a lot of time baking in the kitchen with his mum. Well, eating and baking.(Supplied: Dylan McQueen
)The bond with baking transcended his former years into adulthood.
“It just transpired into [a love of] baking something, giving it to your friends and family and them enjoying it,” Dylan says.
Building a business from the ground upWhen it came to what he would bake, Dylan wanted something niche.
“I just felt like scrolls were something that would be pretty unique to Mount Gambier,” Dylan says.
A popular delicacy to have with coffee in Europe and Northern America, Dylan was surprised by how many people did not know about them in Australia.
He started baking batches for friends and family before advertising online.
Creativity is a big part of the appeal for Dylan. He’s created more than 80 scroll flavours at the shop.(ABC South East SA: Bec Whetham
)In the early days, he would sell around 50 scrolls, getting his Facebook customers to pick them up from his house.
The response was good enough to start selling at the Saturday farmer’s market and wholesaling through local cafes.
By the time he opened the shop front in April 2020, it was safe to say most people in Mount Gambier knew what scrolls were.
Dylan now bakes out of a commercial kitchen and oversees a team of 10 staff.(ABC South East SA: Bec Whetham
)When it came to developing his home baking business into a large-scale commercial operation in the space of 18 months, he credits the internet and local businesses.
“I definitely haven’t done it all by myself … I owe a lot to a lot of the cafes here,” Dylan says.
“I [also] feel really grateful to have the team that I have.”
Looking aheadDylan is looking to keep expanding the business with a second store in Adelaide.
“The end game is to start a business and then have it operating without you needing to be there,” he says.
Blueberry cheesecake scrolls.(ABC South East SA: Bec Whetham
)When it comes to waking up wanting to go work each day, Dylan does now.
The change has been felt by his kids too, three boys now aged three, six and eight years old.
One came home recently with a piece of writing where they had to say what they wanted to be when they grow up. His response was, “a scroll man”.
Dylan with a couple of his staff at the Moorak shop.(ABC South East SA: Bec Whetham
)His advice to them will match what he tells any other classroom he visits.
“Just find something that you love to do.”

Fitness and Exercise-Finding the Right Program for You