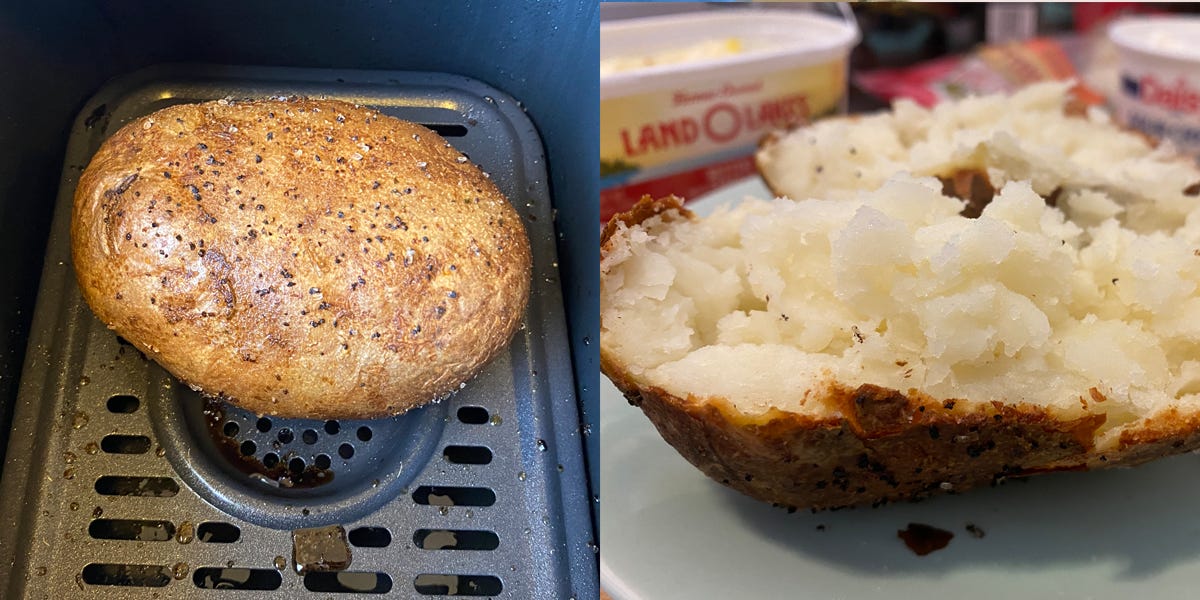 A perfectly cooked baked potato is a satisfying side or even main course, depending on how you dress it up.
Ideally, you want a fluffy middle and a nicely seasoned, crispy outer skin. But there are a lot of cooking methods out there that won’t yield these results.
In an effort to find the best way to cook a baked potato, I tried three different methods using a microwave, air fryer, and oven. For each one, I simply used a cleaned russet potato, oil, and seasoning.
Read on to find out which appliance made the perfect baked potato.

First I used a quick microwave method to cook my potato

This was the quickest way to cook the potato.

Using the microwave took almost zero effort.
The only downside was having to poke the uncooked potato with a fork, which wasn’t super easy and slowed me down a bit.
I also didn’t like worrying whether or not I pricked it enough times to ensure it wouldn’t pop in the microwave.
After poking the potato about 10 times, I put it in the microwave on high for five minutes, turned it over, and cooked it for another five minutes.

The potato came out dry and almost chalky

It was cooked unevenly.

I ended up overcooking the potato, which led to a dry, unappealing final product.
Because every microwave has different settings and heat strengths, it was hard to find the right instructions to make an evenly cooked baked potato.
For my second variation, I cooked the potato in an air fryer

This was an effective cooking method.

I liked using the air fryer because I didn’t have to poke my potato a bunch of times for airflow.
All I did was spray it with cooking oil, season it with garlic salt, and pop it in the air fryer at 400 degrees for 45 minutes.

I loved the interior of this potato.

I checked it halfway to make sure it wasn’t burning and used tongs to rotate the potato for an even fry.
After 45 minutes, the skin was crispy and the potato was done.
When I cut it open, I was shocked at how evenly cooked it was. The potato was easy to fluff, and the skin had a great texture and flavor.
The last method I tested out involved baking the potato in the oven

This took the longest amount of time.

I used a fork to poke 12 holes all over the potato so moisture could escape while it cooked.

Poking the fork in and out of the spud was just as labor-intensive as it was with the microwave method, mainly because the fork kept getting stuck.
Before I placed it in the oven, I coated the potato in oil and salt. Then I cooked it right on the oven rack for an hour at 350 degrees Fahrenheit.
The potato turned out OK, but it didn’t beat the air-fryer variety

The potato was pretty good inside.

After an hour in the oven, the potato was done.
It came out relatively fluffy on the inside, but it wasn’t as evenly cooked as the air-fryer method.

Out of the 3 methods, the air fryer totally won

The air-fryer method was simple and foolproof.

The air-fried potato came out perfectly.
It was evenly cooked — fluffy on the inside and crispy on the outside — which gave the potato a great shape. The crispness of the skin also made it ideal for stuffing with hearty toppings.