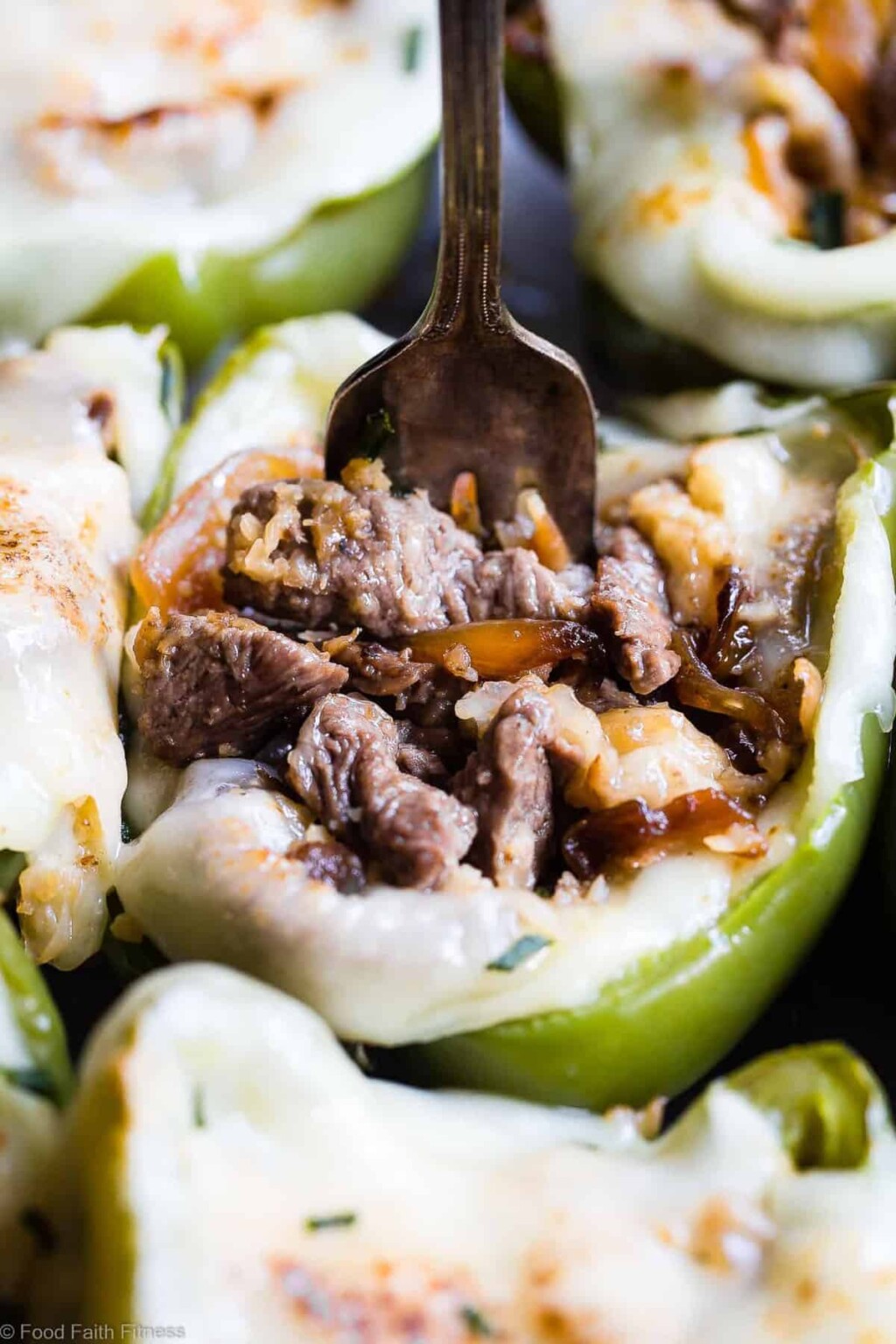 Low Carb Keto Philly Cheesesteak Stuffed Peppers with cauliflower have all the flavors of your favorite sandwich in a healthy and easy meal!

Are you guys getting sick of cauliflower rice yet?

I can just see you now, sitting on your rocking chairs (necessary) on your sundecks, peeping your little eyeballs at your tablet and going “MORE cauliflower rice? I thought the whole30 stuffed peppers would be the only time she tried stuffing cauliflower into peppers”

At least I didn’t put cauliflower rice into cookies and try to ninja veggies into your face holes like those paleo breakfast avocado cookies with kale.

Why you will LOVE This Recipe

After a long, hard day adulting and doing important things, ALL you want is some relaxation and good food. And what’s better than COMFORT FOOD that’s also healthy?! Yeah, that’s right, nothing’s better. Nothing AT ALL. Today’s keto philly cheesesteak stuffed peppers bring SO much flavor, texture, and deliciousness to your plate, and they are also made with healthy ingredients that you’ll feel good about feeding your family. They are also keto friendly, as they are loaded with protein and healthy fats and low in carbs (thank you cauliflower rice). You and your crew will LOVE gobbling them up!

Making DELISH food doesn’t have to be complicated and these keto cheesesteak stuffed peppers certainly prove that! They are made with healthy, whole foods that both nourish and give your body the energy it needs. Here’s what you’ll need to gather up before getting started: 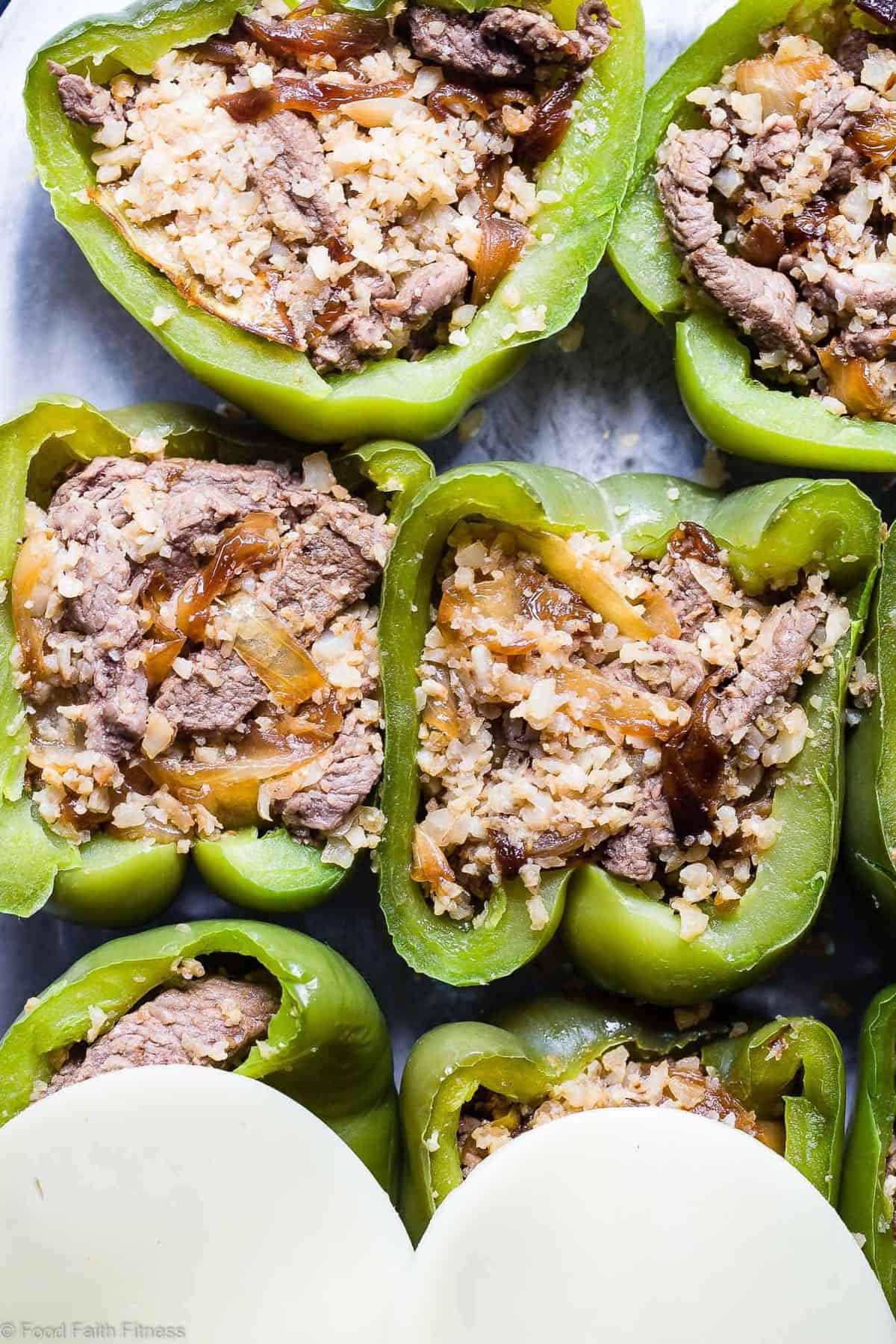 How to make Cheesesteak Stuffed Peppers

In a large pan, heat up some oil and add in the sliced onions when it is shiny. Add some salt and cook, stirring every once in a while, until the onions are brown and caramelized.

While the onions cook, bring a large pot of water to a boil and add in the bell peppers. Let them cook for a few minutes or until they begin to soften. Drain and place on some clean, dry paper towel, patting off the peppers as needed. Arrange the peppers in a pan and turn on the oven.

Heat the remaining oil in a large pan over the stove and add in the sliced beef. Cook until it’s browned and cooked. Transfer it to a plate.

Process your cauliflower in a large food processor until it becomes fine rice-like crumbs. Add it into the pan that your beef was cooking in and saute until golden brown. At this point, add the beef and onions back into the pan as well as some salt and mix everything together well.

Fill the peppers with the filling evenly and top each pepper with a slice of cheese. Pop the pan in the oven and bake until the cheese has melted and the peppers are tender. Next, set your oven to broil and cook an additional couple of minutes to brown things up a bit!

Serve up your finished peppers and DEVOUR! 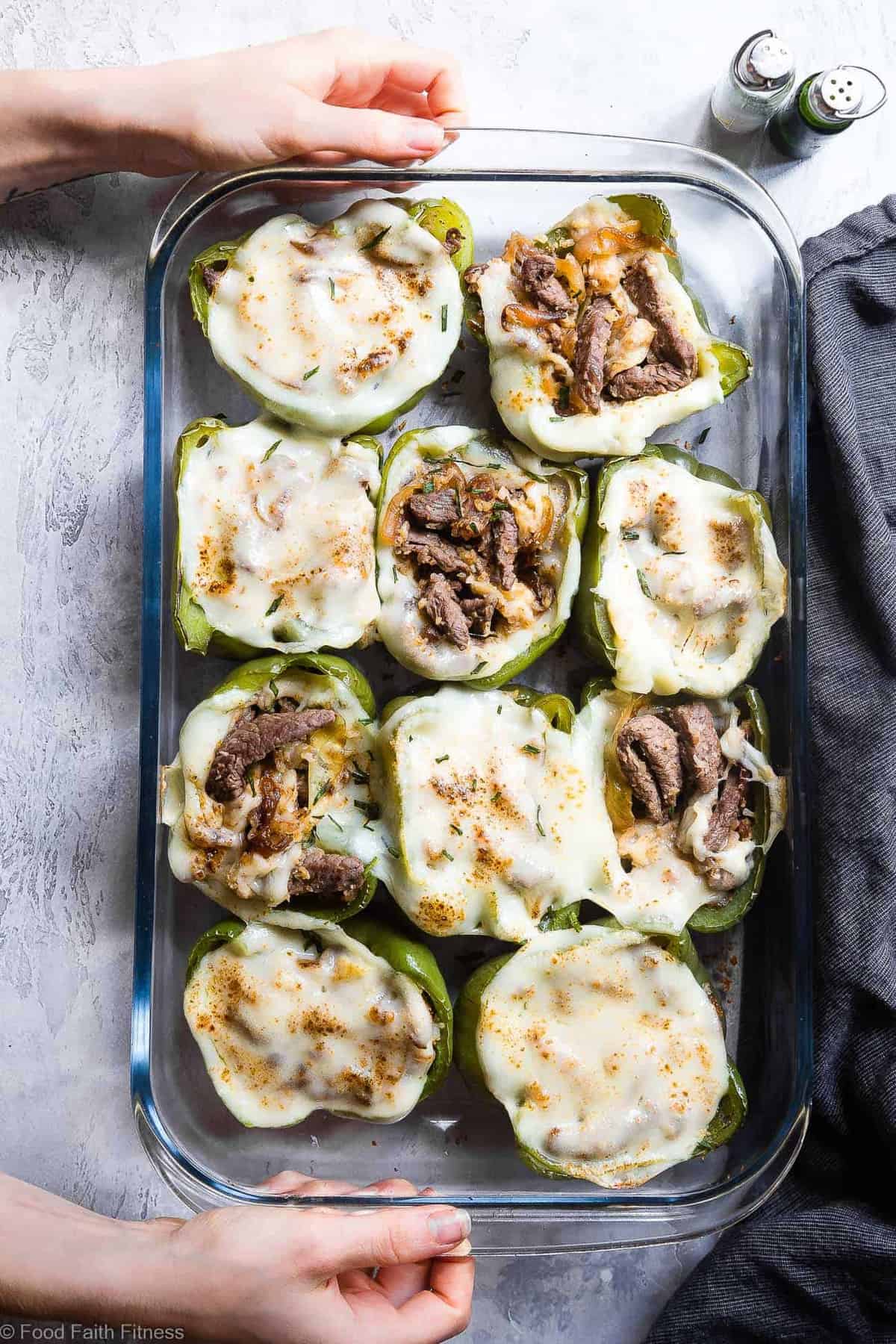 What type of peppers should I use?For this stuffed peppers recipe, I used Green Bell Peppers and sliced off the top, removing the seeds and membranes inside. You could also use red, yellow or orange bell peppers if you want!

Do you boil the peppers before stuffing them?I do recommend boiling the peppers just for a couple of minutes to start the softening process. They will soften more in the oven when you bake them, but boiling gives them a head start!

What kind of Beef should I use?For this recipe, I used top sirloin beef steak and sliced it very thinly against the grain. I also removed any large chunks of fat before slicing it up. This type of steak is very tender and cooks well- it won’t get too tough when baked in the oven. 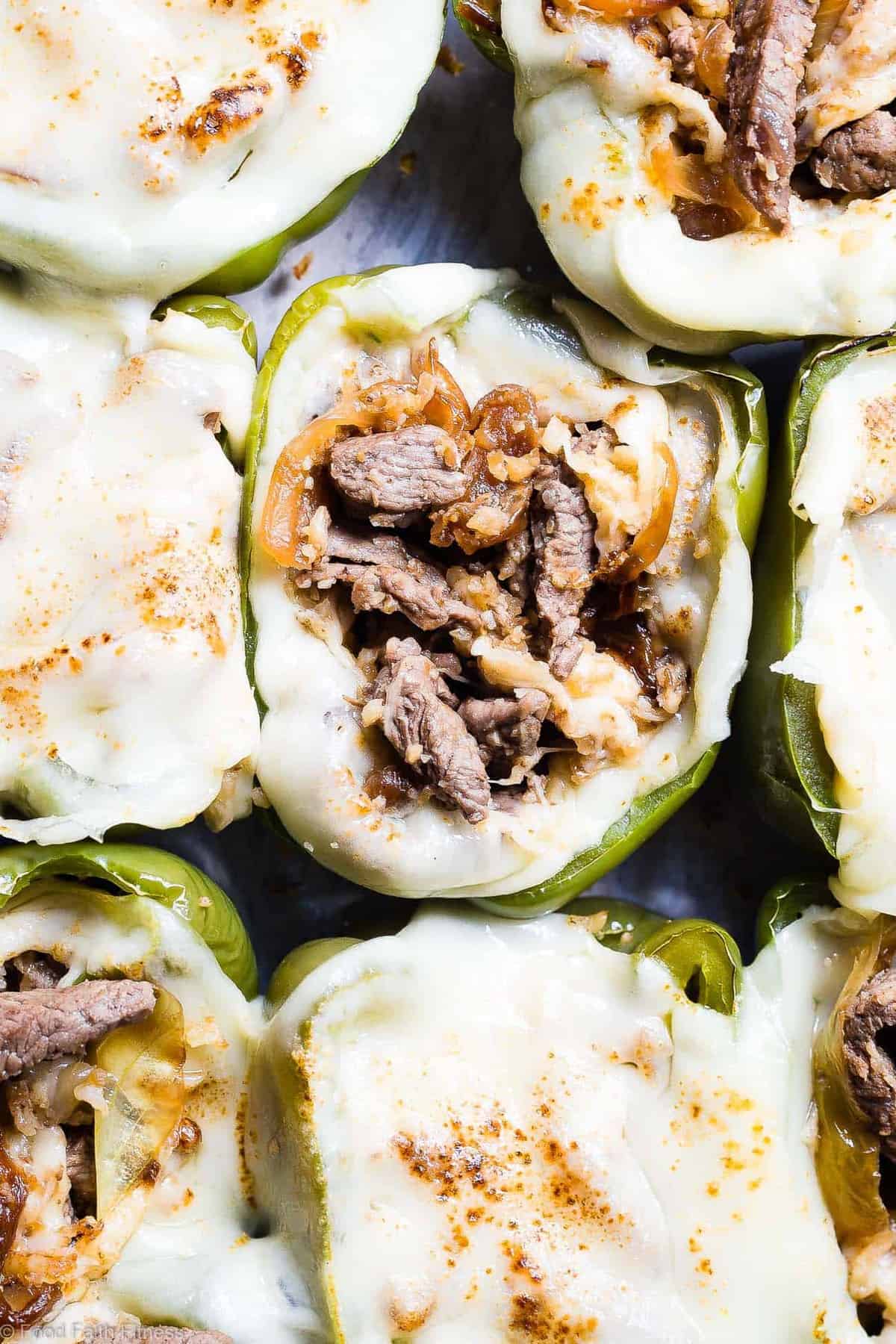 These philly cheesesteak stuffed peppers keto are kind of a full meal deal, but if you want to serve some side dishes with it, or serve it as part of a 3 course keto feast, there’s nothing stopping you! I recommend starting things off with a hot bowl of keto tomato soup, then enjoying these stuffed peppers, and finishing things off with a decadent slice of keto chocolate cake. Your guests are going to be impressed and their bellies will be full and satisfied.

How to store Stuffed Peppers

These stuffed peppers are fantastic for meal prep because they keep well in the fridge! I recommend storing them in an airtight container for up to 3 days in the fridge. Pop them in the oven and let them heat up slowly when you’re ready to enjoy them again. 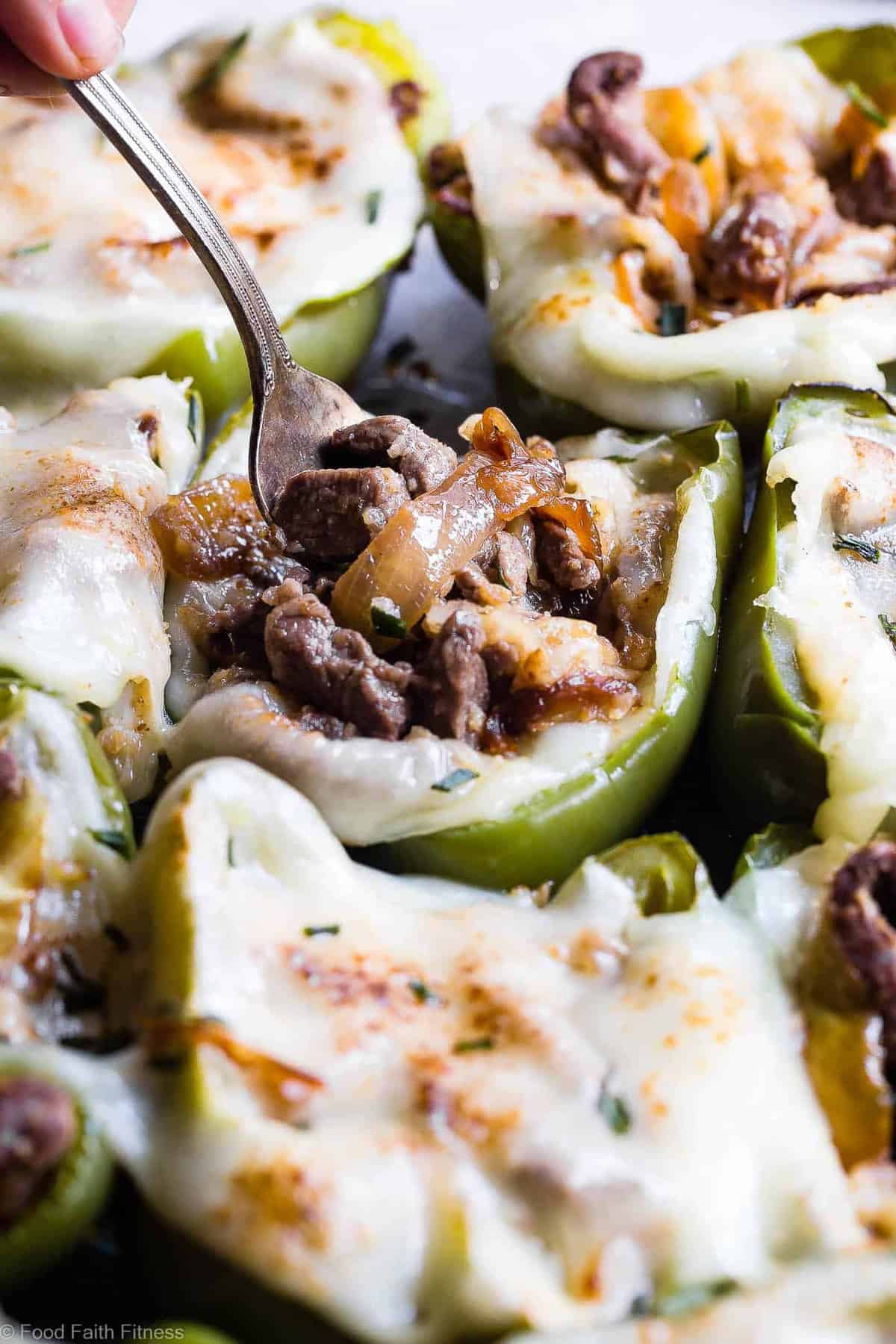 No Bean Whole30 Keto Chili In The Instant Pot 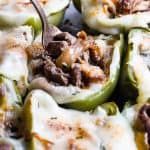 In a large pan, heat the 1 Tbsp of olive oil on medium heat until shiny. Add in the sliced onions. and a pinch of salt and stir until they are coated in the oil. Cook, stirring every so often, until the onions are caramelized and golden brown, 30-45 minutes. If you have a very hot stove, you may need to turn the heat to medium low, as you don’t want them to burn. Don’t stir too often, as you want the bottom to caramelize properly. While the onions cook, place the prepared peppers in a large pot and cover with water. Bring to a boil and boil for 2-3 minutes, until they just begin to soften. Drain and place on a layer of paper towel, gently patting any of the water off.  Arrange the peppers in a 9×13 inch pan and turn your oven to 350 degrees. Heat the remaining 1 Tbsp of oil in a large pan on medium heat. Cook the sliced steak until golden brown, draining out the excess fat. Transfer to a plate.While the beef cooks, place the cauliflower into a large food processor and process until “rice like.” Place it right into the pan that the beef was in and cook on medium heat, stirring occasionally, until golden brown.Once cooked, add the beef and caramelized onions into the pan and sprinkle with sea salt. Stir until well mixed.Stuff the peppers with the mixture and top each pepper with a slice of cheese (1 oz cheese per pepper half).  Bake until the cheese is melted and the peppers are tender, about 10-15 minutes.  Turn the oven to high broil and cook an additional 2-4 minutes until the cheese is golden brown.DEVOUR!

*Slicing the beef very thin is key. It really helps to do it when it is still partially frozen.

FOR THIS RECIPE, I RECOMMEND: 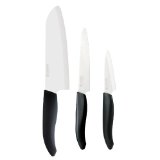 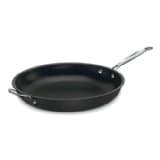 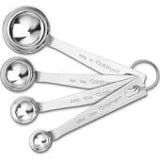 This post may contain affiliate links, but I only recommend products that I actually use and